Start a Wiki
The game client is a core component of Brick Planet that allows players to play and create their own games (like ROBLOX). Players are able to chat, change outfits or even hang out with friends without using the forums - with the click of a button to play. This is a software you will have to download the client to be able to play Brick Planet games and also the Workshop with it. This is one of the main components of Brick Planet's multiplayer system.

Please choose your operating system to download the client:

The Linux client is distributed in the AppImage format.

After downloading the client, you will be able to play games on the website. All you need is an account and a client.

The new client release date was confirmed on August 13th by Isaac. The ETA of the new game client was, August 18th.

The client for macOS and Linux gets released on July 21, 2019

As of now, Windows thinks BrickPlanet is a virus and it will put your PC at risk.

The client is in early development stages and most meshes/textures are not working at the moment. This might lead to lag. Also, the increased website and game traffic has resulted in minor lag.

The .exe lead to being detected by anti-virus programs incorrectly. There was later an update to stop this from happening.

They're many features as from now to make the game work as it should be, just like character movement, chat, backpack and etc.

Character movement is not finished yet. The movement is relatively slow and the walking sounds aren't quite finished. Holding the SHIFT key while moving will make the player walk faster.

When you join a game, you will have a nametag above your character's head. This nametag displays your username, and it will indicate if a player is a staff member.

There is a chat menu on the top left of the client. You can close it by clicking the arrow. If you press T, you are able to chat with people. There is a scroll you can use to view the chat log.

If you press B, you are able to open your Backpack and use any accessories that you have bought from the Store.

In the menu, there are four categories:

In the players section you can view the leaderboard and all the players on the server. There are three buttons that appear on this section.

This button kills your character and sends you to the spawn. (A keyboard shortcut to instantly reset is SHIFT + R)

This button closes the menu.

This button closes the client entirely.

In this section you can change your graphics level using a slider, and show or hide the name tags of players.

In this section you can change the X and Y sensitivity of your camera.

In this section, you can report people in-game, if they're doing something inappropriate.

This section appears for players who are in a server with an admin.

WASD or arrow keys to walk.

The loading screen is comprised of multiple in-game photos and tips.

The game client and workshop have both been down under maintenance off and on for a while, this is due to a lot of updates being made to the back-end code. These updates have improved features and made gameplay smoother.

Beta Testers are certain players of Brick Planet that were given the ability to beta-test games, starting early in December 2017. Staff were given access to games later in December.

Game thumbnails were a feature added on January 2, 2018. They show a screenshot of the game's map. Before generated game thumbnails it was just a house.

The Workshop is a feature used for creating games. You can add all kinds of stuff, you can add a spawn, a brick, a sphere, a cylinder and a basplate.

The Interface is a feature in the Workshop. It is used to place models and edit objects.

The basic place is where you can place basic models.

This is the section where you can place models by users of BP, but players can't do this yet. You can do this when the new workshop comes out.

This is the section where you can save your models and place them later.

Client v2: released on August 19, 2018. This introduces effects such as fire and sparkles, lighting, and introduces scripts to make the game function. This also introduces more stuff.

The BLOX City client was the client on the old website, https://bloxcity.com. It was not as good as the new Brick Planet and was completely seperate in terms of code, and quality.

You could download the client from https://bloxcity.com/download with 32-bit and 64-bit versions of the client. It was a modified version of Chromium and it was all done on the web.

There are a few game demos that have been released by Brick Planet staff: 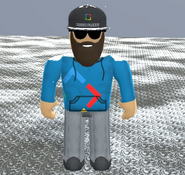 "Did you know that it can snow in Brick Planet?", from Isaac's Twitter

A screenshot of the earliest version of the game client (the 2016 Pre-Alpha BLOX City game client)
Add a photo to this gallery
Retrieved from "https://brickplanet.fandom.com/wiki/Game_client?oldid=14660"
Community content is available under CC-BY-SA unless otherwise noted.